‘In the deepest hour of the night, confess to yourself that you would die if you were forbidden to write. And look deep into your heart where it spreads its roots, the answer, and ask yourself, must I write?’ – Rainer Maria Rilke 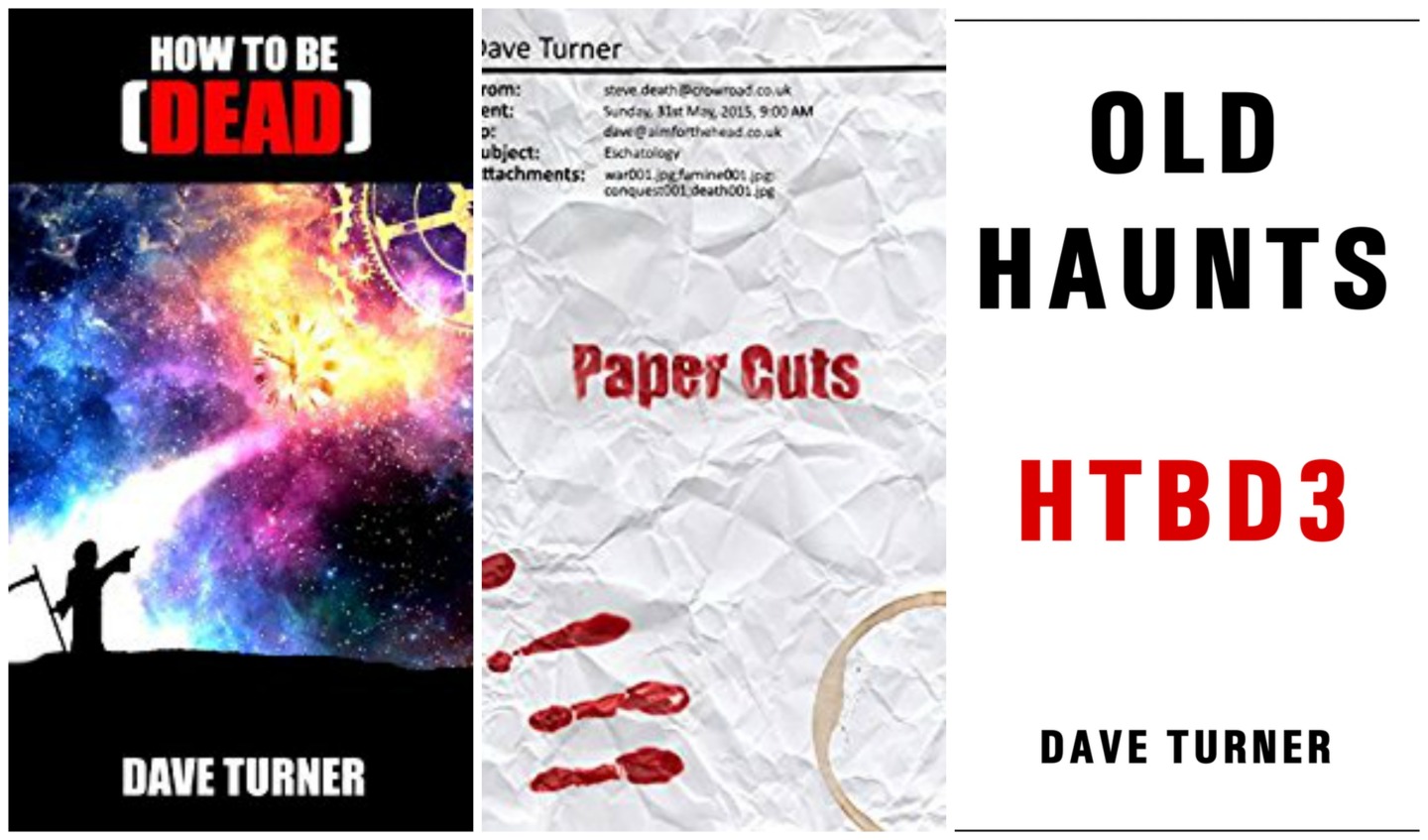 I’m not a natural when it comes to reading, I mean, don’t get me wrong, I can read, i just don’t enjoy it as much as some people seem to. I’m jealous of people who can curl up on a rainy weekend and get lost in a book (ahem Ang, Bev & Ruth), for me it’s binge watching old series of The Challenge! However I did get right into Dave Turner’s How to Be Dead series of novellas (nice and short, kept my attention span!) and now I feel the world needs to know about them!

Dave actually caught my attention on Twitter (it was the naked selfies he used to post back when there were no decency filters – fnar, fnar) – he started a parody  twitter account called @itsdeath which was based around Death as a character (called Steve – obviously) think of that scene from Bill & Ted’s Bogus Journey when Death follows the old lady round the supermarket and you’re along the right lines.

It doesn’t hurt that Mr Turner (right) and my hubby Dave, could have been separated at birth!

All the best comedians have the ability to make the strangest subjects seems funny. Tom Stade does a hilarious skit about market meat vans for example. And being a chronic over thinker with previously diagnosed medical hypochondria there’s nothing less funny to me than death. Dave put a face to my worse nightmare and suddenly Steve Death was someone I no longer feared but was someone I wanted to share a bottle of Pinot Grigio with. I also found myself sympathising with him, he would often complain about getting bogged down with paperwork and bureaucracy, when all he wanted to do was get on with his job. He also loves a chocolate biscuit.

So from the Twitter account came the novels, after a small kickstarter campaign (which I proudly sponsored myself) the adventures a Steve, his assistant Anne and reluctant hero, ordinary man (also called Dave) were born. Of course the great thing about social media these days is when you’re planning on a writing a blog about your favourite author, you can reach out to them in the vague hope they may wish to contribute. So, seeing as Dave himself can tell his story was more articulately and funny than I ever could, here he is:

I’d like to say that I had a five-year publishing master plan from the start, but really I started a Twitter account as Death because I was bored in a dull office job.

An outsider looking in would be a good way to make jokes about the human condition, I thought. He’d be bored, befuddled and have an odd sense of humour after hanging around us for so long. People liked it. It was also a very convenient way of making observations that I wouldn’t make myself.

Then I decided I should do something with those jokes. I had an idea for a series of 3 novellas telling the story of Death and the problems he had trying to sort out the undead. “I’ll bash them out over the course of a year,” I thought. “It’ll be a nice little project to keep me out of trouble.”

Four years later, I published the last part of that story. It all started easy enough writing the first novella. It was called How To Be Dead (after a Snow Patrol song). People really liked it. That made me very happy. “I should probably write the second one,” I thought.

Then I was diagnosed with a seriously massive heart condition. You know when a footballer drops dead on the football pitch? That’s the bad boy I’ve got. There were hospital visits. Medication. Implants. Wires stuck into my heart. But I’m now technically a cyborg. Which is actually the childhood dream come true.

I’ll be honest, there were grim days contemplating my own mortality. What would my wife and kids do if I wasn’t around tomorrow? Who’d remove the Billy Joel albums off my iPhone before people discovered them?

Then I thought, “Hang on. I’m writing comedy books about death. I can probably use this.”This may go some way to explaining the number of Billy Joel jokes in the books.

When you stare in to the Abyss, sometimes the Abyss stares back. So you wave to the Abyss. Then you realise the Abyss was actually staring at something over your shoulder and it all gets a little bit awkward. And then you just bloody well get on with it.

An agent got in touch to say that he loved the first novella and did I want to turn it into a novel and be represented by him? “Yes! Of course!” I said. So I signed with the agency with ideas that I would be An Important Novelist. And I wrote a novel. Which I wasn’t

completely happy with. Then the agent decided he didn’t want to be agent anymore.

So I was left agent-less and holding a novel I didn’t knowwhat to do with. So I decided that since I’d had an idea for 3 novellas, I’d better start the second one. That was called Paper Cuts (after songs by Nirvana and The Boy Least Likely To). People seemed to like that a bit more than the first one. “I’d better write a third one,” I thought. So I did.

It’s called Old Haunts (after a song by The Gaslight Anthem).

After I’d dragged a story that’s been banging around my head for half a decade kicking and screaming into the world, I didn’t know what to do next. So I’m writing a fourth story. Simple as that.

Writing. It’s basically about just bloody well getting on with it

I’ve read all 3 books (twice now) and I change my mind every time about which one is my favourite. How To Be Dead is all Steve Death, and that’s what I loved so much about the twitter account, you can see him sitting in his office on Crow Road in London rolling his eyes and talking about the good old days.

In Paper Cuts the story is developed more and we’re introduced to Deaths old mates (the other 3 horsemen of the apocolypse – naturally) who also have their own personalities. The banter between the 4 of them is hilarious and reminds me of my own Dave and his 3 best mates (I won’t go into who i think is who though!)

And I love, love, love Old Haunts. Mostly I think because you learn a bit more about Anne, Death’s loyal PA and how she  came to be Steve’s loyal sidekick. Having worked as a PA myself for doctors, surgeons and professors in the past, working with people who believe the fate of mankind lies solely in their hands is something I can relate to.

Oh, there’s also so zombies and suicide cults thrown in there for good measure too! If you’re looking for something to read this summer, the HTBD series won’t disappoint. All i’M waiting for now is for it to be turned into a TV series then I need never read another book again!

My favourite quote from the series:

Dave: Some people say dreams are visions that you can predict the future or see into the past
Death: Yeah well some people say that a rich tea is a good biscuit. People are stupid

You can buy all three books here

And find out more about Dave here: