When I started this blog a couple of years ago I never imagined it would have taken off the way it has. Don’t get me wrong, I’m certainly not one of the heavy hitters of the blogging world; I’m not in a position to quit the day job and write full time – much as I’d love to but it’s the creative outlet I’d been searching for for years and the fact that anyone is interested in anything I have to say is quite frankly astonishing.I

I find getting inspiration for posts tough and I’m always amazed at what takes off and what doesn’t. Blog posts I slave over and am rally proud of, posts I’m really excited to publish, will only get a handful of views. Then posts that I cobble together and use as filler because I have nothing else to say do extremely well. There seems to be no rhyme or reason as to what floats and what sinks.

So I thought I would have a look back and talk you through my top 5 most popular posts, the stories behind them, and why I think they’ve been the most read: 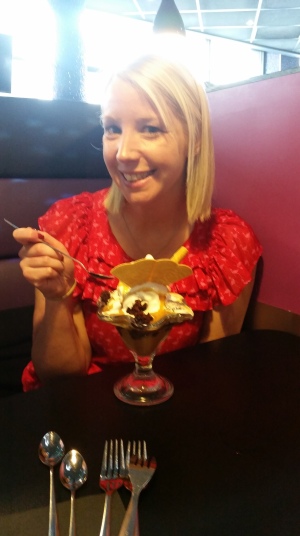 One thing I love doing for the blog is ‘research’ so when 2 ice cream emporiums that look like total carbon copies of each other opened up in Newcastle in quick succession, I needed to ‘research’ them. Turns out the reason they’re so similar is they were owned by a duo I’m London (as Creams) who fell out so a second brand (Kaspas) was devised. I had great fun with Ang, Dave, John, Carrie and Emma trying one after another one weekend, who doesn’t love ice cream for lunch two days in a row?! I think the popularity of the post is simple. The brands are SO similar that loads of people google to find out which is better, and I seem to be the only person who’ve reviewed them side by side rather than individually. After the restaurants respective sites, my post is first hit on Google. Which is pretty bloody cool.

This one genuinely baffles me as I seem to get loads of daily hits when you would imagine it would just be easier to o straight to the Boots, Superdrug or Amazon for some user reviews. I suspect a lot of the referrals are through google images as the post contains a before an after picture of my unstraightened/straightened hair. I’ve been a loyal Could Nine an since 2008 when it comes to hair straighteners because they work as well, if not better, than GHDs but have the added bonus of being able to adjust the heat settings. Sadly one August they gave up the ghost and ceased working mid straighten. Luckily enough they retained enough heat for me to finish doing my hair (phew!). Cloud Nine have excellent customer care and would fix them for £30 for me but I needed an interim pair to tide me over. I settled on the remmington ones as they got the best reviews for the cheapest price and, well if you want to know how I got on with them you’ll have to read the review…

This post all started so innocently. I wanted a yellow blazer to be able to wear in the spring to brighten up some of my dullest outfits and it kind of snowballed from there into my most viewed post ever. I decided to take a punt at what looked like the dream yellow blazer and ordered from China, i’d like to say pretty blindly however I did take some advice on sizing and quality beforehand. I ended up getting a pretty substantial haul for about £25 (including postage) with varying degrees of success as the results and comparison pictures range from the surprising to the ridiculous. I suspect the majority of views to this post again come from google images when people are looking for comparison pictures but hey, a view is a view and I can only hope that people who stumble across the post stick around and read some other stuff while they’re there.

The opening statement says it’s all, the best ideas are born out of necessity. Dave and I wanted to do something on a rainy bank holiday so I googled free walking tours of Newcastle and couldn’t find one. So we decided to create our own. We had great fun devising it and including our own favourite pubs and sights. I think without a doubt what’s helped it’s popularity is I cheekily posted it on a forum on TripAdvisor and whilst I got an email from then slapping me on the wrist telling me off for self promoting, they never actually took it down, so I get a lot of referrals form there. I also get loads of positive comments from people who’ve done it and even messages from people from all over the world asking if I’ll guide them round! I love my city but i’m not showing tourists round for free!

I wrote this after I’d discovered the holy trail of anti wrinkle creams in Forget Your Lines by Tesco’s Along Came Betty range, which is a blatant rip off of Soap and Glory (how ever the girl with two knock off Mulberry handbags has no room to pass judgement on that!) What was even better it was only £3.99. I then discovered that pretty much the whole range was being discontinued bar some bubble bath and body butter. I even tweeted Tesco to see wagwan who confirmed the make up range was no more. The success of this post was a surprising one to say the least but I think I have timing to thank for that. The post originally went live over the summer so had a few months to develop a decide SEO. I reckon come Christmas peoples stockings were laden with ACB gift sets and people googled to find out more about the brand. The post now ranks higher in some search engines than the actual Tesco website itself. Which is still pretty bloody cool.

What been your biggest surprise hit? Leave links in the comments!